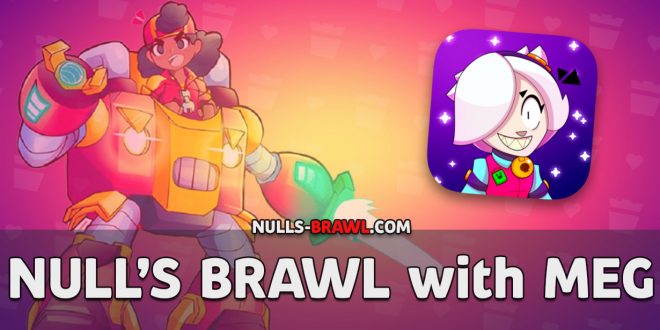 Hello everyone, if you’re subscribed to our social media, you’re probably aware of all the innovations. But it’s also worth mentioning them on the site so people know what’s going on inside the Null’s Brawl server itself before the update with Meg.

This time the update of the main version of Brawl was minor, the updates are not significant. They added one fighter and 2 new skins, which are not so difficult to add. The only thing you need to spend time on the implementation of Meg’s combat mechanics, her star powers and gadget. That’s what the Null’s team is doing right now! But before this update, a lot of work was done on bugs, as well as repeated innovations.

A few words about the new version and its implementation, which will not take much time. The game’s client has already been fully explored, saw the new chips, which for now will not be implemented. We will have to wait for the next update on the official server. Added new skins and made adjustments to the old, for example, added new sounds for Pam. And also familiarized with the function of automatic selection of a skin for a fighter, which is very relevant to Null’s Brawl. After all, where but on this server, you will see all the skins, and now they will be randomly selected. All of this is within the next week, if no additional problems arise.

What was done before the update?

Let’s go with trumps, they added the ability to get rewards with Brawl Pass. Yes, it’s not a full-fledged implementation of seasonal rewards, but now you can at least get them. Rewards are approximated in the normal game, if there are comments, you can write about them in the comments. After each re-entry rewards will be reset and you can get them again.

The new loading screen, which will also be added to the new version (38.111) with Meg. Evaluate another cool job, fall mode so to speak.

Implemented and added 2 new game modes “Showdown+” and “Volley Brawl”. In connection with this changed the rotation of modes in slots, added 2 additional slots. This was made specifically for single modes and 2 slots with new modes. Also made some important changes in Volley Brawl mode and fixed all the problems with wrong ball behavior.

Download the latest version you can always in our Telegram channel or from our website. At the moment you can download the current version from the link below.