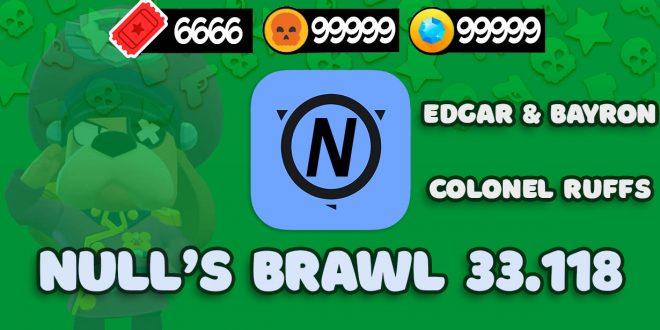 A preview version with our Null’s Brawl 33.188 server logic has already been released. Many bugs and non-working functions, report all bugs.

For a whole month, you left us a lot of comments about when the new version will be by Edgar and Byron. We would like to release it right after the official version of the game was updated, but unfortunately the game logic was broken for us. Therefore, it was decided to create our own logic, so that in the future we can release versions quickly and even create our own versions of game modes and other functions.

The test server is based on the new version 33.118, which adds the 5th season of the Brawl Pass, Colonel Ruffs and new space skins. All this you can try now on the online servers. At the moment, gadgets and stellar forces are not working correctly. Also, victory and loss can be displayed in different ways, there are a lot of such moments. We warn you in advance, as we are already tired of reading messages that we are not doing anything. The server is being created, and now you can look at how much it has already been implemented and help us fix all the errors.

Regarding the question of Edgar and Byron, they are naturally on the server and you can play with them. In general, we have added all the functionality that was presented in the official game. The only thing left to do is to finish the battle server, install a more powerful hosting, as online this week broke a new record.

On January 28, 40,397 online players were recorded simultaneously. This is a heavy load on our servers, so over time we will have to expand. But with the new method of implementation, the load will decrease and we will be able to remove the expectation, which will also affect the increase in the number of players.